I created for two years the cycle “Flowers of Love” I, II, III, IV, influenced by “The Flowers of Evil” by Charles Baudelaire. The main themes of sex and death were considered scandalous, so at the time the book was treated as a byword for indecorum.
“Flowers of Love” I, II, III, IV were created with respect and reference to the known sample, filled with other content and meaning.
In each of these forms one flower is implied and can be read – each form is also a female torso. They are colorful and express different states and character. They look like a kind of still life, as a vase with flowers, limited on their pedestals. By them I would like to achieve emotional impact by means of the color, the structure of the material and the plastic variety.
They are realized in a vertical composition and could be presented separately. But I prefer their joint exposure, not only according the history of their creation, but because of their mutual and consistent logic of the various characters provoked by the image.

There are no reviews yet.

Be the first to review “Flower of love II” Cancel reply 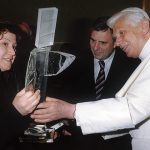 On May 24-Th, the Day of Slavic Letters and Bulgarian culture, as a member of the Bulgarian Church delegation invited to the yearly celebration in Rome I was honoured to be received by His Holiness Pope Benedict XVI. On this occasion I offered to the Holy Father a glass sculpture of an Angel stepping down […]

BULGARIAN GLASS – TRADITION AND MODERNITY Dear Ladies and Gentlemen, Dear Fellow Artists, It is the first time when in such a number we, Bulgarian artists in glass, have taken part in such as a representative forum. Here we can show not only our art, but also share our searching for as well as our […] 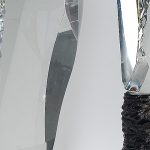 Glass as magic reality Glass is transparent and resonant. It is massive and brilliant. It is incarnated in a rich variety of forms, colors, optical effects and illusions. It exists to become art. Glass is synthetic but tolerant form of art where light and transparency meet each other to become one. Graceful plasticity and artistry […]